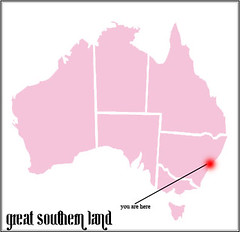 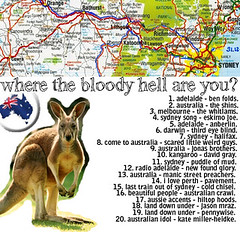 so, i come from australia. it's not a bad place. i like living here. but i've never been anywhere else. hopefully this is soon to change :)
today i filled out and sent away forms for rotary youth exchange. first on my list of preferences is canada, but really i'm not phased as to where they jet me off to if in fact i am chosen. it took me all day to fill out this four-page intensive questionnaire which asked such probing questions as;  "describe the occupations of both of your parents" (in all honesty my mother is unemployed and my father is deceased).
so, here is my little homage to australia. it is a mix of songs which feature references to australia in the title. i didn't think i'd find this many.
i started out doing a mix of songs with US place names in the title (eg. boston - augustana, hello i'm in delaware - city and colour, raining in baltimore - counting crows, etc), but thought i'd see if i could round up a couple of australian themed songs. perhaps a US city mix will follow at a later date.
adelaide by ben folds would have to be my favourite out of everything.
and, i'm sorry, but... i had to put in one bogan aussie song, "khe sahn" by cold chisel. hahaha.
the jason mraz and pennywise covers of men at work's "land down under" amused me.
admittedly, i think puddle of mud's "sydney" is about a girl called sydney and third eye blind's "darwin" doesn't seem to mention anything about the city, but i hope you'll let them slide ;)
i hope you enjoy, there's quite a mix of genres.

can anyone think of any more songs which reference australia in their title or lyrics?

fingers crossed they like my application and they decide to send me overseas next year :)
also, i hate that "where the bloody hell are you?" ad. it makes all australians seem like cussing, uncultured creatures, but i had to use it :D

so, in the words of track number 8, "come to australia, you might accidentally get killed". 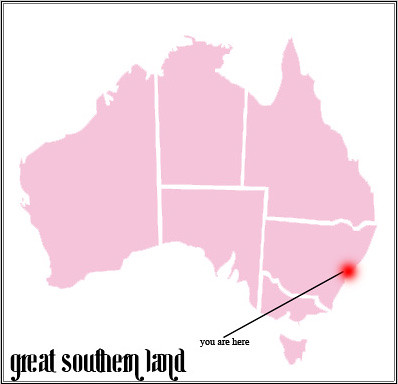 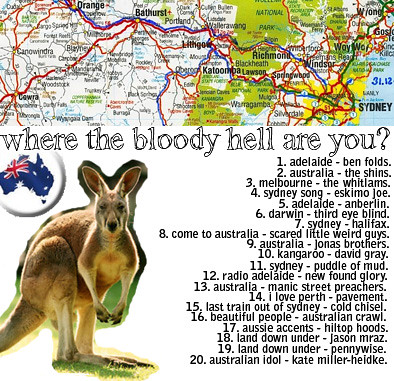